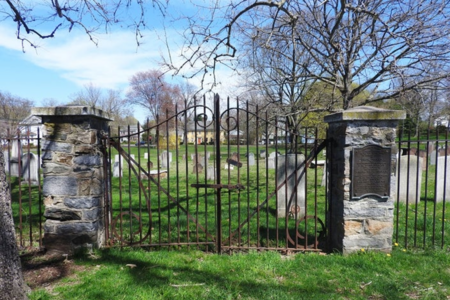 See Home or Calendar for other Society activities

TOMBSTONES BY BARBARA STEWART ON MONDAY SEPTEMBER 20TH AT 7:00 PM

The repair and cleaning of 18th century tombstones will be discussed at a meeting of the Milford Historical Society at the Mary Taylor Memorial Church on the Green on a date to be determined. The speakers will be Ethan and Barbara Stewart who unintentionally are now experts on revitalizing a cemetery.

It all started when Ethan and Barbara became concerned about Stratford’s unkempt cemetery of the historic Christ Episcopal Church that dates back to 1723. It was overgrown with weeds and many tombstones were in the dirt. Fixing those things sounded fairly easy, so they recruited volunteers from the David Humphreys Branch #1 of the Sons of the American Revolution along with Milford’s Freelove Baldwin Stow Chapter and the Sarah Riggs Humphreys-Silliman Chapter (that includes Stratford) of the Daughters of the American Revolution. They worked together to restore the cemetery once also known as the Episcopal Burying Place or Old Episcopal Burying Place.

Then came the hard part and three years later the work continues.

So much had to be done. Some cracked stones looked like puzzle pieces that needed to be glued together. Then it was discovered that one gravestone had to be moved from one grave and reset on another. Apparently, in the past someone had put a fallen stone on the wrong grave. Fortunately, the church has extensive records that helped volunteers set everything right again.

Also, they discovered that at the back of the graveyard local slaves had been buried with no markers.  That added another chapter to the site’s history, and ongoing research may reveal which families had slaves and if there is a record of their names.

Volunteers fixed up the gravesite of William Samuel Johnson, one of the signers of the United States Constitution from Connecticut. Johnson was also the first president of King’s College, now known as Columbia University in New York City. Mr. and Mrs. Stewart wrote a letter to Columbia and got a $10,000 donation to carry on the restoration of the burying ground. Apparently, the Honorable Mr. Johnson still had some pull and high standing at the university!

The Project expanded. They photographed all 294 stones and recorded the inscriptions. Where wordings were not readable, they referred to the church records that, surprisingly, had the original wording from each stone. Now that information has been put on computer.

It also came to light that the cemetery is the resting place of 19 Revolutionary War Veterans, but no one remembered ever seeing flags on their graves. The SAR saw to it that flag holders and markers were installed.

There’s a lot more to the story, and the Stewarts will present slides that illustrate the best ways to revitalize a cemetery.

There is no charge for the program, but donations are always welcome. Coffee and dessert will be available before the meeting.

Barbara is a member of Milford’s Freelove Baldwin Stow Chapter of the DAR. She is a past regent and is currently the acting regent. She is also chairperson for the Wreaths Across America ceremony held every December at Kings Highway Cemetery.

The SAR and DAR are non-profit organizations with the objectives of perpetuating the memory and spirit of the men and women who achieved American independence.  The groups promote the development of an enlightened public, foster patriotic citizenship, and work to preserve historical landmarks.
​

The Milford Historical Society’s summer exhibit will focus on “Five Women and Their Legacies” and will tell the stories of Sally Stowe Clemence, Rutheva Baldwin Brockett, Ruth Platt, Kay Barrett and Dr. Helen Langner. They all were leaders who led fascinating lives that touched and influenced many generations.

The exhibit, at 34 High St., will open Saturday, June 5 from 1 to 4 p.m. and be open every Saturday and Sunday through Columbus Day except for the Fourth of July.

All their accomplishments have been substantial in the fields of finance, history, education and medicine.

Admission is free, although donations are gratefully accepted.

The Three Historic Houses will open to the public from 1 PM to 4 PM Saturdays and Sundays except the Fourth of July through Columbus Day Weekend.  The Eells-Stow House, the Clark Stockade House and the Bryan-Downs House