Col. Samuel Eells was very prominent in the affairs of both Milford and New Haven Colony. He married Martha Whiting Bryan (his second wife) who bore him a son, Nathaniel. Nathaniel married Martha Stow who unfortunately only lived for seven months after the wedding. The widowed Nathaniel then moved to Middletown. He eventually inherited the Wharf Lane property from his stepmother (the Colonel's third wife) which he then sold to Stephen Stow, his deceased wife's brother.

Stephen Stow was born in Middletown in May 1726 and married c. 1752 Freelove Baldwin of Milford. They had seven children, six boys and one girl. Stephen was the captain of a coastal schooner and carried on a trading business up and down Long Island Sound. His day book is in the possession of the Historical Society, and tells an interesting story of his trading business.

Four of their sons, Stephen, Samuel, John and Jedediah served their country in the Revolutionary War, but their father, Capt. Stephen Stow gave his life while nursing 200 smallpox-stricken American soldiers. They had been brought from a British prison ship and cast ashore at Milford Harbor. The full extent of Capt. Stow's heroism can be appreciated only when it is understood that in 1777 very little was known about fighting this disease and its death toll was appalling. Forty-six soldiers died in one month and are buried in a common grave along with Capt. Stow.

Capt. Stow's historic home was saved from destruction in 1930 by the efforts of the Freelove Baldwin Stow Chapter of the D.A.R. The Milford Historical Society was organized shortly thereafter for the specific purpose of saving this, and many other, Milford antiquities.

During 1981-1982 the Eells-Stow House underwent extensive remodeling because of serious settling on the north facade. This shed much light on the original plan and structure of this old house. All clapboards, sheathing, window frames and sashes were removed revealing the basic structure of the framing. Tradition had the date of the house late in the 17th century coinciding with the arrival of the Eells family in Milford. Investigation of the revealed framing put the date a little later, possibly as late as c. 1720.

The oldest part of the house has now been restored by replacing clapboards, sheathing, diamond-pane casement windows and interior refurbishing. This restoration has repaired the Eells-Stow House so that it is now structurally sound and presents an historic building to the people of Milford which, along with the Bryan-Downs House and the Stockade House, represents Milford's proud past.

The Eells-Stow House is listed on the National Register of Historic Places. 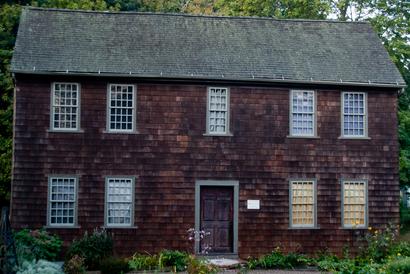 c. 1700
The Eells-Stow House is believed to be the oldest house in Milford and takes part of its name from the Eells family, who arrived in Milford in the later 17th century from the Boston area.

Samuel Eells, born c. 1640, came to Milford with his bride in 1668. After his wife's death, he moved to Hingham, Mass. Upon his death, the Wharf Lane property was inherited by his son, Col. Samuel Eells. 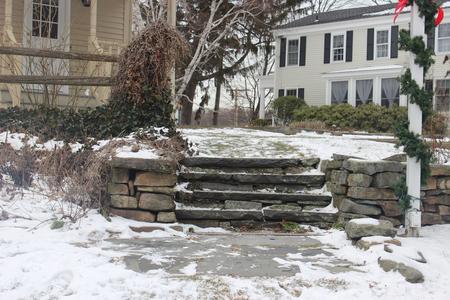 In 1780 Michael Peck, a builder, and David Camp, his assistant, dismantled the house and built a new house using many of the salvaged building materials. Some of the supporting beams and framework are original to the 1659 house, and are still being used today.

The dimensions of the 1780 house, which you see today, were probably about the same as the old one. Peck's innovations included higher ceiling, larger windows, a rare built-in bookcase, and raised paneling.
Our building, as you see it today, is still being restored. Ongoing projects are the reconstruction of the original six-fireplace center chimney with its beehive and warming ovens, the paneling, the winding front stairway and the bookcase.
The Clark-Stockade House displays many interesting pieces of Milford furniture, including the Marion Buckingham Tibbals collection, and items from the Platt, Beard, Camp and Eells families.

The Bryan-Downs House
c. 1785
Originally built by Captain Jehiel Bryan and his son on the Post Road between Milford and New Haven, near today's Kings Highway Cemetery, this house was dismantled and rebuilt as you see it today. Jehiel Bryan, Jr. wed Mary Treat in April, 1784 and they took up residence in their new six-room salt-box house. Their daughter, Mary Esther, married Ebenezer Downs of Woodbury and lived in the old family home also. 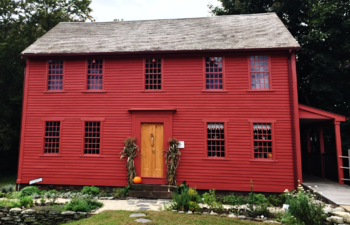 c. 1780
The "Stockade House", so named many years ago, was traditionally the first house built outside the stockade or palisades which surrounded the town of Milford against Indians. The original house was moved to its present site in 1974 from Bridgeport Avenue near the hospital. This house was begun by Deacon George Clark about 1659 and grew in several stages to a saltbox style house.

In 1837, upon inheriting the house, their son Ebenezer Jr. extensively enlarged and remodeled it. The original stone chimney and fireplaces were removed down to the level of the first floor and a smaller chimney was erected. At that time, the front hall was rebuilt and stairs to the second floor were replaced. The covered walkway to the barn was made into a summer kitchen, approximately where our small meeting room now stands in the ell-part.
After Ebenezer Jr.'s death in 1873, the family continued to own the house, but used it as rental property until the 1900's.

It was erected on the Milford Historical Society property in 1977, having been dismantled and stored for several years. This interesting house is typical of the period, retaining its original siding and windows across the front. As the rooms are rebuilt, we will endeavor to reconstruct them around the old center chimney area as they had been before 1837. In 2011, the roof was raised to add another floor for the rear portion of the house.

The Claude C. Coffin Indian Collection is at the south side of the first floor. There is also a "Country Store" and a small meeting room on that floor. On the second floor will be a Victorian parlor and bedroom, a textile storage space and our small reference room.