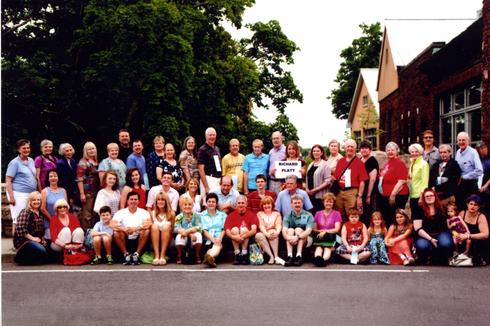 The 4th Founding Families Weekend, on July 19, 20, 21, will be a reunion of the extended families of Milford’s first settlers, and some family trees are likely to sprout a few more branches.

Participants will swap stories, meet “new” relatives, and perhaps learn more about the lives of their ancestors.

All participants are related to one (or as many as eight) of the founders who spent their first night here on Aug. 22, 1639 on the banks of the western side of the harbor.

The weekend’s events will be held at several venues. The first will be a reception on Friday, July 19, from 7 to 9 p.m. at the First Church of Christ, Congregational. The church and settlement were founded at the same time in 1639; this reception is almost on same site where the 200 European colonists gathered to worship.

Registration will begin at 9 a.m. on Saturday, July 20 at the Milford Public Library, another important site. The library is located on the land where in 1640 William Fowler built a grist mill, the first mill in New Haven Colony. During registration there will be a looping slide show of the founding of Milford.

After registration, participants will have the chance to tour at their own pace. Some may walk to the Old Milford Cemetery where many of their ancestors’ names can be found on the headstones, or they may tour the 17th and 18th century houses at Milford Historical Society, 34 High St. It’s just a short walk over the Hotchkiss footbridge, along the harbor, and then a right onto High Street – the Society headquarters is just at the top of a small hill.  The weekend is co-sponsored by the Milford Historical Society that has planned two exhibits for founding families: a display on the history of Memorial Bridge is at the library on the stair landing, and an exhibit of more than 200 photos of Milford from the late 1800s to early 1900s is at Historical Society headquarters.  The “Our Town – Our Story” exhibit is made up of photos from the Daniel and Roma Moger photo collection. The MHS also has a display from the Stowe family of bills of sale and ephemera from early Milford businesses.

Included in this free exhibit is an opportunity to have docent-led tours of the Nathan Clarke-Stockade House c. 1780 and the Eells-Stowe House c.1700 one of the oldest restored and preserved dwellings in Milford.  In the afternoon, each family will meet at its appointed time on Memorial Bridge to have photos taken beside the granite block marked with their antecedent’s name. Not all the planters and after-planters’ names are on the bridge, so some families will pose by a nearby monolith put up in 1989 during the town’s 350th Anniversary Celebration to remember more settlers. The bridge has 56 surnames, 54 men and their wives, plus the names of two women who were widows. Many more names, mostly of after-planters, are on the monolith.

During Saturday afternoon members of the Milford Genealogy Group will help attendees with research in the library’s Genealogy Room.

Milford was settled 380 years ago, and there are hundreds of thousands of people related to the 44 founding families. If you are wondering if you are one of them, Richard and Jane Platt, organizers of the weekend, will be happy to help you do a search. Just email your genealogical questions to Jane at jhp@nutmegancestry.com.

There will also be opportunities to see the Botsford Homestead, 84 Gunn St., but tour times must be prearranged by contacting Richard Platt at rnplatt@optimum.org. The original founders, Henry (1608-1686) and Elizabeth (Woolhead) Botsford (1614-1692), came to Milford in 1639. Seems like they, and many of their ancestors, liked what they found. The Botsford family will be holding its 115th Reunion this year.

The Platt family will mark its 38th Reunion celebrating other founding settlers, Richard Platt (1603-1684) and his wife Mary (Wood) Platt (1605-c.1676). This is the fourth Founding Families Weekend sponsored by Richard Platt, former Milford Historian, and his wife Jane.  The first three reunions were in 1976, 1989 and 2014.

For early risers, on Sun., July 21 First Church will hold an 8 a.m. worship service at Gulf Beach. All are welcome to come to the shore of the Sound and adjacent harbor where the first Europeans in Milford harvested seafood, built ocean-going ships, and found employment in many trades.

The last weekend event will be later on Sunday at 9:30 a.m. when the descendants can worship at First Church and then gather one more time for a special coffee hour hosted by church members.

Today’s families will end their reunion visits in the same place where their ancestors started their new lives in 1639.